Criminal defense attorney Matt Brock, a Partner at the law firm of Best & Brock PLLC ("B&B”), in Chattanooga, was named as a “2020 Rising Stars” for the Midsouth region. This is the third year in a row he has received this honorable recognition. 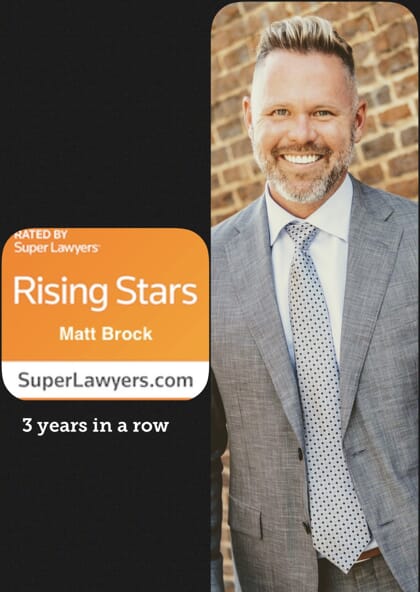 Mr. Brock handles cases from misdemeanors to First Degree Murder, however his practice is primarily focused on DUI and drug related crimes. He is one of the few attorneys in the nation certified as an instructor in the DUI Detection & Standardized Field Sobriety Testing course recognized by the National Highway Traffic Safety Administration (NHTSA). This is the same course that police officers take in order to make DUI arrests while in the Academy. As impaired driving laws with regards to substances other than alcohol are becoming more prevalent, Mr. Brock is ahead of the curve with his education. He has been certified in ARIDE (Advanced Roadside Impaired Driving Enforcement) to help dissect when officers are making calls of reasonable suspicion based on alcohol OR drugs. He has also taken a modified version of the drug recognition evaluation (DRE) training given to law enforcement. DRE includes a number of different tests, field sobriety tests (some of which are also used to determine alcohol intoxication) as well as physiological tests, (such as those which measure the dilation of the suspect’s pupils, blood pressure, internal clock, etc.) This training allows Mr. Brock to not only assess whether an arrest has been done properly for alcohol impairment but also allows him to stop officer's from making claims that they suspected there may have been other drugs involved as well. Mr. Brock has also taken the Gas Chromatography Course at Axion labs in Chicago, Illinois in order to defend clients where blood alcohol analysis may come into question. In addition to serving the Hamilton County TN and surrounding areas, he practices in the northern eastern counties of Georgia.

Super Lawyers is a nationwide rating service that utilizes a selection process consisting of independent researchers, peer review nominations and evaluations to rate outstanding lawyers from more than 70 practice areas who have attained a "high degree of peer recognition and professional achievement." To attain Super Lawyer status, attorneys must first be nominated by their peers in Tennessee; according to officials, only five percent of the state’s attorneys make it through the multi-phased selection process.