The Tennessee Bureau of Investigation has released the 2021 publication of its annual “Crime in Tennessee” report. This report is a collection of data gathered from every “incident” reported by law enforcement agencies throughout the state. As is described in the opening letter, the Tennessee Incident Based Reporting System (TIBRS) tracks every reported crime, including all of the details of the incident and involved persons, and compiles it into reports like for further analysis.

A list of all of the TBI’s annual publications, including this report, can be found on their website here.

What is in the report?

The report also follows the general trend of DUI arrests throughout the state:

After the state-wide data, the report then provides summaries for each individual law-enforcement agency, including sheriff’s offices, police departments, and local university or housing authorities.

The incidents reported by the Hamilton County Sheriff’s Office and the Chattanooga Police Department are relatively proportional to each other, and to the state totals, as to which crimes are most common and how often they’ve occurred. We’ve compiled the data from the three agencies in TBI’s report in the graph below: 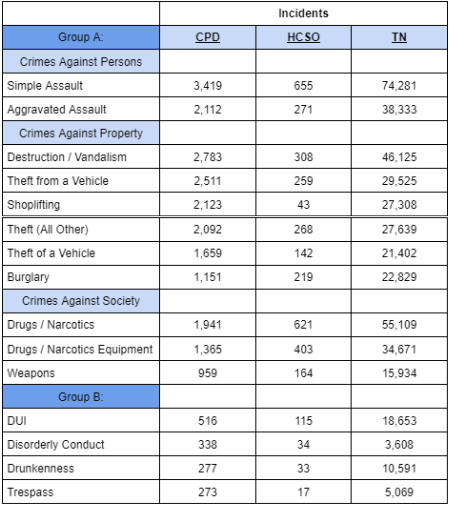 Again, this data is taken directly from the report produced by the TBI, and we’ve only selected a handful of all the types of offenses reported based on how often they occur. For the full set of data, you can view their report using the link at the beginning of this article.

Statistics like this can always be helpful for a variety of purposes, but it’s always important to remember that the numbers by themselves aren’t enough to make sound conclusions. This is why the TBI, throughout the report, discourages any sort or ranking or comparison between agencies, counties, or crimes based on these reports alone. For example, it would be improper to conclude that the HCSO is less effective than the CPD based purely on the fact that they are handling fewer incidents, when in reality the CPD employs a number of more officers than the HCSO does deputies. The CPD also has particularized squads, like the DUI task force, which is specifically trained and assigned to handle DUI reports and arrests. Organizations who cover overlapping jurisdictions might also coordinate efforts and specific duties.